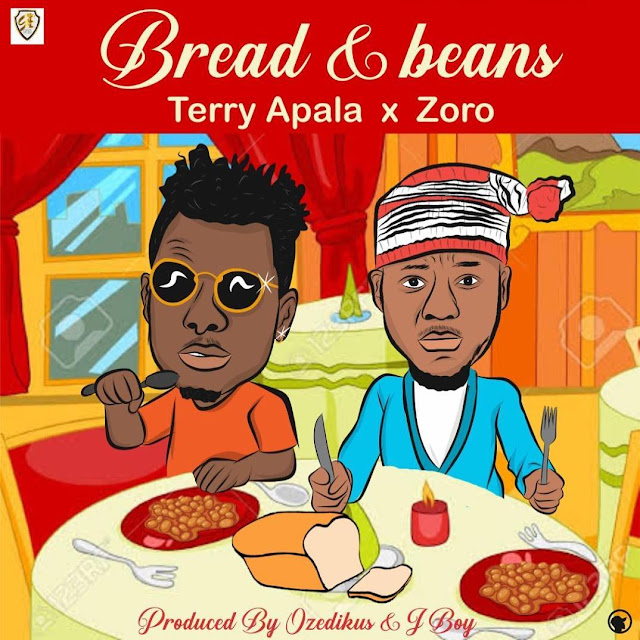 Leader of the new school and Apala Hip-Hop connoisseur – Terry Apala of GAZI Entertainment, opens his account for the year by teaming up with another terrific leader of the new wave music – Zoro, bringing about something fresh out of the music kitchen and this one is titled “Bread Ati Ewa”.

Terry Apala, signed to GAZI Entertainment and known for his melodious Apala rhythm and flows, is widely appreciated for his precocious talent and undoubted ability. Having teamed up with Zoro, who’s already killing the east and has gradually penetrated into the market with his last single – “Stainless” which features Simi.

After shattering music charts with his last single – “Baca”, taking over the airwaves and social media with fans creating a trend, Terry Apalacomes through yet again, teaming up with super producer and regular partner in music crime – Ozedikus, J Boy and Zoro as he thoroughly showed why he’s highly rated by Industry heavyweights.

Take a listen to “Bread Ati Ewa” by Terry Apala and  Zoro.

DOWNLOAD MUSIC
What do you think about this song?
We want to hear from you all.
Drop your comments.
NEWLY RELEASED SONGS

On the new track, he collaborates with one of the Nigerian heavyweight singers, Olamide, who delivered a catchy verse on the track as expected.

The track is impressive, and it’s worth adding to your playlist.

Rated Nigerian, Dimexx has dropped his version of “People”, masterpiece record performed by a songstress from Cameroon, Libianca .

This beautiful rendition of the latest hit song, “People”, sees Dimexx grabbing the interest of his listeners with catchy vocals.

This song is a blockbuster that you should add to your playlist if you enjoy decent music.

Popular street singer, Son Of Ika Jamokay, is back with another street song titled “Trenches”.

This time, he teams up with another street and rave artist of the moment, Portable, who did justice to this banging track. The song comes with a fast-tempo beat produced by Oga Klef Beat.

Nigerian popular street singer, Slimcase, is back with a new single, which he titles “XL”.

Then he collaborates with a talented singer and music producer, Lord Sky.

This new track serves as a follow-up to his previously heard track titled “Huyour”, which features Peruzzi, Larry Gaaga, and Jay Willz.

The new track was released under the Empire Mates Entertainment (EME) imprint.

However, this interesting song serves as his first official release of the year, and it also serves as a follow-up to his previously heard track titled “Selense”.

The new song was produced by Zaki Amujei and 9Fingers.

A talented Nigerian singer, Blaqbonez, is back once again with his official theme song titled “Breaking The Yoke Of Love”.

The track features Nigerian heavyweight singer Chike and a songstress named Raybekah. Both artists did justice to the song, and it’s worth adding to your playlist.

This follows Blaqbonez’s spectacular campaign in 2023 with the release of his star-studded album “Young Preacher,” the joint album with M.I. Abaga and A-Q, amongst others.

The track was produced by Ramoni and released under the stables of Chocolate City.

It is Blaqbonez’s first offering since he dropped his Young Preacher album back in October 2022.

The talented Nigerian singer, Lojay, debuts a brand new single and video, which he titles “Moto”.

This serves as his first official single for the year. It serves as a follow-up to his previously heard record titled “Canada” which features DJ Maphorisa Kabza De Small and Herc Cut The Lights.

However, this interesting single serves as his first song released for the year. It serves as a follow-up to his last hip-hop record titled “Otilo (Cover)”.

The new banging tune was produced by 2tupondeebeatz.