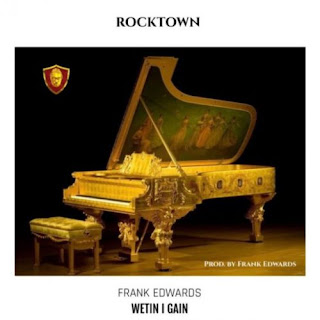 Frank Edwards presents new song “Wetin I Gain” to bless our day.
The Rocktown boss, talented singer, music producer and minister comes through once again to minister the essence of praising the Almighty God. On this new record titled “Wetin I Gain” Frank introduced the popular word brought to the general public by Victor AD to the gospel world.
He sings, it been a while he had fell on his keens to praise and thank God for the grace and blessings he receives daily due to the fact that he pays more attention to early things around him. But after thinking deeply and sees that he lacks nothing then owes God lots of worship because if he doesn’t what will be his gain as he will just turn to an ungrateful being.
Listen and Worship the Lord to gain more blessings…
DOWNLOAD MP3
What do you think about this song?
We want to hear from you all.
Drop your comments
Related Topics:
Up Next

Gospel Music: QueencyGlo – “It Is To You” The Song “Holy Spirit” features uplifting and motivating lyrics that will have every listener surfing a wave of gigantic bliss that resonates in your spirit long after you hear it.

Rest assured that you will be ministered to and left with a lifted spirit every time you listen to this beautiful and angelic tune because SamBazz Rhythm is here toreel you into an enchanting experience of supernatural reverence.

Watch the Video below:- Nigerian talented Veteran Gospel music singer and songwriter, Chinyere Udoma has released another impressive tune which she titled “Happy December”. And it’s right available here on our website for your free and fast download! Talented Nigerian music singer and songwriter, KCee has come through with another impressive tune which he titled “Thanksgiving” featuring Okwesili Eze Group. And it’s right available here on our website for your free and fast download!

Steve Crown – All The Glory Award winning Nigerian Gospel music minister, music singer and songwriter, Steve Crown has released another amazing brand new gospel music which he titled “All The Glory”. And it’s right available here on our website for your free and fast download! He’s one of the popular Nigerian music producers and gospel singers who has been in the music industry for decades now. He had been dishing out different songs. He delivers another praise song for your listening pleasure. The track comes with a high-tempo beat as usual, and it’s worth adding to your playlist. And it’s right available here on our blog for your free and fast download!!! However, the track “Mercy Me” is a low tempo music audio which was taken off her newly released project tagged “Unbroken” album.

The song also comes after the successful release of her record tagged “Abasi”.