One thing about Ruger, he’ll always make a statement and has done so again with his new music snippet “Asiwaju”. Listen to the first few minutes of the song here.

Jonzing World star and the unofficial music industry king of shade, Ruger, has previewed new music titled “Asiwaju” and he made quite the statement even on the first few lines.

Previewed on his Instagram with a short video and a promise of a speedy release, Ruger had captioned the video saying;

Asiwaju” is produced by his frequent collaborator Kuk Beatz and the promise of the double release sees Ruger once again tag new music in circulation as noise, making this sequel to a tweet he’d made where he’d shared similar sentiments.

“Just because of all the unnecessary NOISE I let you all listen to last week, I’ve decided to cleanse your ears with TWO SONGS instead ASIWAJU and RED FLAGS

Ruger had also updated his bio to carry the self-assured lines from his “Asiwaju” song that goes “I’m your dad, I’m your uncle, I’m your popsy”. 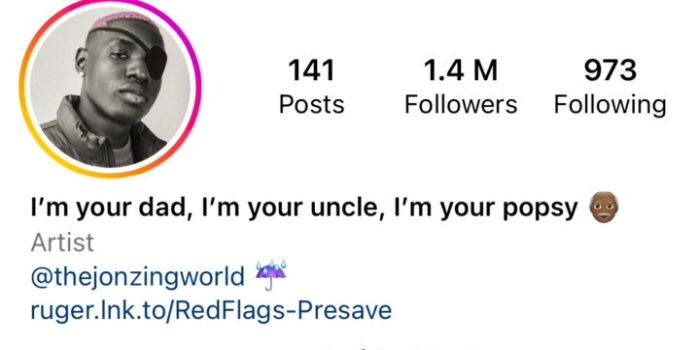 The singer had previously previewed his anticipated single Red Flags with a short video but had postponed its release, citing the atmosphere in the music industry at the time as the reason.