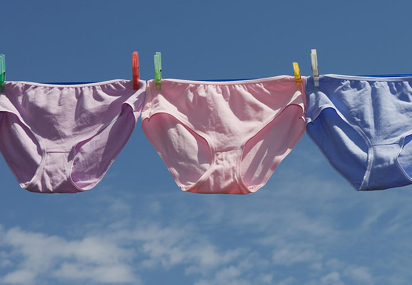 Akure—Two security guards, Samuel Linus and Adekunle Ogundana, who allegedly stole two underwears belonging to the daughter of a clergyman within a church’s premises in Akure metropolis, were yesterday paraded alongside suspected kidnappers by Ondo State Police Command
8 killed, 9 injured in Plateau, Kaduna attacks Briefing newsmen in Akure, the state Police spokesperson, Femi Joseph, said the daughter of the clergyman washed two of her pants and spread them on the line at about 8p.m. in the presence of the guards and by 6a.m., next day, the panties disappeared. Joseph said the suspects, who are attached to the orthodox church, were posted to the apartment, which was highly fortified by a private security outfit in the state. The suspects denied complicity in the offence for which they were paraded. Also paraded by the state Police Command were two suspected Indian hemp dealers, Sunday Femi and Friday Ami, who allegedly hacked a 75-year-old grandmother, Modupe Olorunfemi, to death at her Owo farm. They killed her for allegedly giving security operatives information about their nefarious planting and selling of Indian hemp in Owo area. The police spokesperson said: “The suspects and their accomplices allegedly killed the old woman. The suspects would be charged to court after the completion of investigation.” In an interview, one of the suspects, Friday, who admitted to be dealing in cannabis business, said: “It was Gbenga that sent us to kill her and he has run away. “He promised to give us N500,000 for the ‘job,’ but up till today he has not fulfilled his promised, because he is nowhere to be found.“ However, the other suspect, Femi, who denied killing the old woman, said he was a commercial motorcyclist who only conveyed Friday to the village, where the woman was killed. Speaking also on the six suspected kidnappers, the state Police spokesperson, Femi Joseph, said they were arrested at a hideout in Emure-Owo Forest during a raid by the Joint Task Force of the security agencies in the state. Joseph said the suspected kidnappers were arrested “at about 3a.m. by the joint Task Force codenamed Operation crime free, acting on a tip-off. According to him, the “six suspected kidnappers were picked up at Emure Junction via Owo, where they gathered in a suspicious manner. “The following items were recovered from them: 16 locally-made guns, 17 cutlasses, 13 knives, seven handsets and N27,820 cash.”

This serves as his debut record for the year, produced by DJ Neptune, Kukbeatz and Choke Boi.

The music video has been shot and would be out in few hours.

Zanku Records’ leader Zlatan begins the year with a catchy record, “Let There Be Light.”

Zlatan links up with his friend, Seyi Vibez, as they both combine efforts to deliver a smash record this summer.

The Dibs-produced song “Let There Be Light” sees Zlatan and Seyi Vibez jumping on a contagious Amapiano sound.

The potential Amapiano-infused song “Back To Sender” keeps Skiibii on the relevant list as he commences his music journey in 2023.

Mystro is credited with production. The song “Back to Sender” is a song Skiibii uses to narrate his trip from Ojuelegba to the world.

Moreover, “Back To Sender” serves as Skiibii’s debut record for the year, and it is ahead of his debut album, which arrives in a few months.

Recall that Skiibii was featured on Rexxie’s global hit song, “Abracadabra,” with Naira Marley. Wizkid jumped on the remix, which drops soon. The talented singer, Popcaan, unveils his first official single for the year and he titled this one “Aboboyaa”.

On the new song, he collaborates with a Nigerian award-winning singer, Burna Boy, who delivers a powerful verse on the record.

The track is amazing, and it’s worth adding to your playlist.